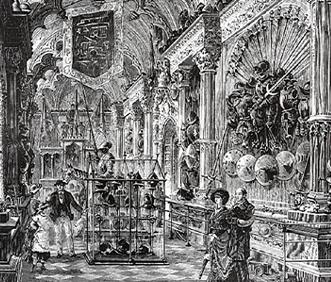 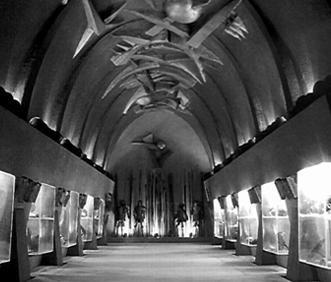 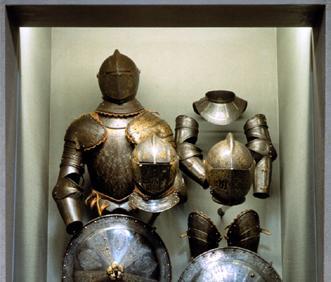 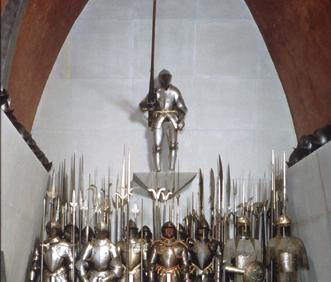 “Back in 1998, when I was first commissioned to stylistically intervene to design the refurbishment of the museum's armoury, my first thought - expressed in my drawings - was to build perimeter walls with niches in which to house display cases. These would contain objects of great historical value and craftsmanship, held in a “suspended” position, thus not revealing their supports. In developing the project later on, given that the scattered elements of my language of abstract expressionism gradually took the form of an “imaginary sky”, I decided to use the vault ceiling itself to position my sculpture about the “Battle of Human History”. I then turned my attention to materials. I used grey-coloured “pietra serena” for the walls. For the floor I used iron, copper and gold. The vault ceiling was plastered with stucco mixed with copper powder, giving a sense of profound and calm reflection and a reddish tone, but it was also dotted with fibreglass elements coated in lead sheeting” Arnaldo Pomodoro The lighting design of the armoury developed alongside the architectural, scenographic and museographic design, undergoing the same structural changes. The display cases containing the most important items of the collection are suspended and illuminated by a "magic", invisible light. In fact, it is the display cases themselves that contain the lighting fixtures, consisting of a recessed multi-compartment system with very low-voltage halogen lamps and asymmetric optics which cast directional, shadowless light onto the objects. Prismatic glass ensures controlled luminance and the even distribution of light beams.