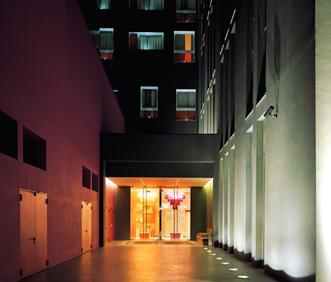 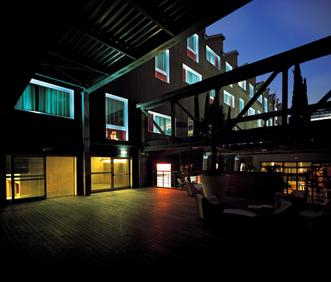 The former industrial area around Via Tortona in Milan is currently expanding to become a fashion and design district but it still maintains its original character thanks to its disused factories, now refurbished and converted into showrooms, laboratories, creative studios and residential lofts. The former General Electric plant has also been renovated. Internally, it now includes a hotel and multi-functional spaces for exhibitions, fashion shows and events. The original exterior has been retained, as has its sawtooth roof, while the grey plasterwork of the external walls has been softened by large glass window surfaces. The lighting of the external façades and courtyards of the building has been entrusted entirely to windows outlined by controlled "fan-shaped" beams of blue light emitted by blue-colored LED fixtures.