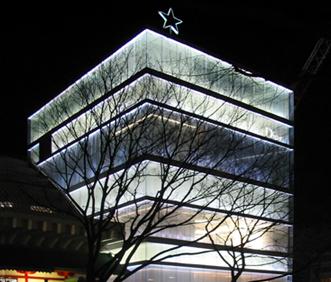 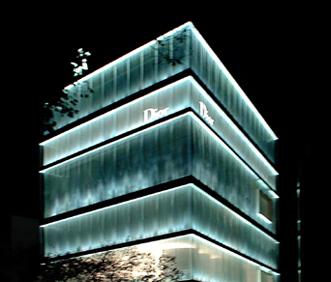 The desire to strongly highlight the Dior collections as though in a museum setup led to the decision to use a system of concealed fixtures, built into in a sloping gorge in the ceiling. These fixtures, equipped with very low-voltage halogen bulbs, illuminate the clothing and objects on display with direct lighting at extremely high luminance levels, making them the absolute protagonists of the space. In December 2003, the French label opened its biggest flagship store in the world in Omotesando, Tokyo. A new concept of a building as a manifesto was thus tried out. The façade is distinguished by its changing colors throughout the day and at night. The interior is characterized by the use of black and white varnish, metal, and black stone flooring. The lighting, which was carefully integrated into the architecture, identified the different functions and products by varying the colors of the fluorescent light tubes, chosen from the varied range of kelvin degrees available (6000 K for the façade, 4200 K for the communal spaces), and by using halogen spotlights (3050 K) on the displayed goods to ensure optimal color rendition.