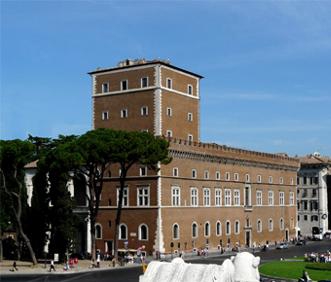 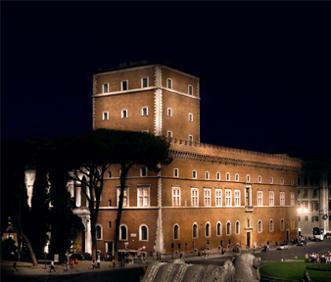 The lighting of Piazza Venezia is currently provided by a set of 23 projector lamps with sodium light bulbs lodged below the roof of the Assicurazioni Generali building opposite. Sodium light bulbs produce only a modest rendition of the colours and light-dark contrast relief, due to the bulbs' practically monochromatic emission. The façade of the palace receives light from the square itself while the high part houses a series of projector lamps, inserted into the intrados of the merlons. These highlight its profiles together with, it is presumed, two projector lamps positioned on the roofing and directed towards the lateral tower: the high part of the palace has been subject to particular scenographic attention. The urban lighting in Piazza San Marco consists of lanterns on posts, partially covered by vegetation, which have little impact on the lighting of the façade or the entrance to the Basilica. The large marble bust of Lucrezia occupies the corner adjacent to the entrance to the palace without any attention whatsoever and has been "abandoned" by the light. The internal courtyard has not been subject to any particular lighting project and lives by the light of the palace and the large lanterns suspended in the porticos: each one houses a cluster of bulbs, perhaps as a result of an adjustment. The new project foresees a general reassessment of the current lighting system, keeping the power circuit of the fixtures and their positioning unaltered as much as possible. It involves the substitution of the currently used light bulbs and projector lamps with light sources of better colour rendition and luminous efficiency and with newly conceived lighting fixtures, with optics that guarantee maximum control of emitted beams and which are equipped with adjustable anti-glare devices. The project intends to restore the nocturnal appearance of the palace using homogeneous and constant illumination values to restore the colours and the light-dark contrast of the architecture, materials and decorations. Accent lighting will be used on the entrance portal and on the two tiles adorned with images of the Saint Mark lion - the only ornaments on the façade.