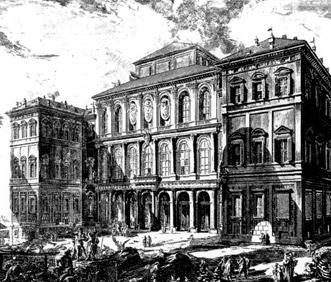 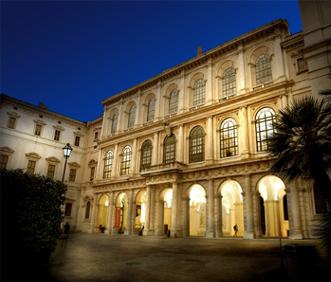 In daylight hours the palace has a façade of light-coloured stone with glass-enclosed loggias, distinguished from the openings of the large entrance portico and from the double row of Serlian windows of the 'piano nobile' first floor, with strong splays on the second floor. The articulation of the openings is provided by the half columns that support the architraves and which at the same time outline the façade. The deep portico on the ground floor links the front of the palace with the garden at the back via a long ramp that arrives at a large group of sculptures delimited by a closed arch. The ramp forms a prominent visual telescope that opens up the structure of the palace on two sides. The right lateral façade, overlooking a garden, is closed off by greenery. The sodium light bulbs included in the current lighting system produce only a modest rendition of the colours and light-dark contrast relief, due to the bulbs' practically monochromatic emission. We propose a general reassessment of the current lighting system (substituting the sodium bulbs with hydrargyrum medium-arc iodide ones, which have a more continuous spectrum, are more similar to sunlight and thus offer better colour rendition), keeping the power circuit of the fixtures and their positioning as unaltered as possible. For the lighting of the façade we think it is necessary to substitute the installed light bulbs (sodium) with bulbs that offer better colour rendition and luminous efficiency (iodides) and to substitute the current projector lamps with smaller, newly conceived lighting fixtures, with optics that guarantee better control of the emitted beams and which are equipped with adjustable anti-glare devices. We propose a nocturnal image of the palace with homogeneous and constant illumination values. We suggest the substitution of the current projector lamps — positioned on the pillars of the portico that, in spite of their small size, are very visible both during the day and at night — with newly conceived technological fixtures fitted with LED light bulbs that, apart from having a very long lifespan, also come in such small sizes as to have no visual impact whatsoever. We propose the continuation of the lightness of the façade with the extension of the lighting to the interior of the glass-enclosed loggias on the first and second floor. We intend to place architectural emphasis, even at night, on the structural and decorative elements of the façade: on the columns that articulate the three floors and on the splay of the windows on the second floor with very small fixtures of LED bulbs. We think it is necessary to give a sense of continuity to the portico and to the great entrance courtyard, with its natural visual telescope, and thus suggest lighting up the ramp that leads to the garden and to the group of statues that close the perspective lines. We can keep the current lighting of the lateral façade with the light diffused from lampposts situated in the greenery, merely substituting the sodium light bulbs with metal halide ones to unify the chromatic view of the building. Some accent lighting can be used on the vegetation to give depth and perspective to the space.