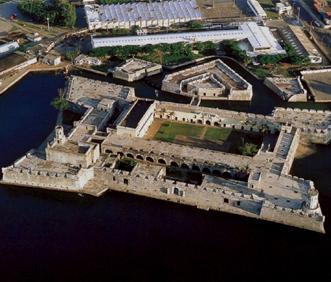 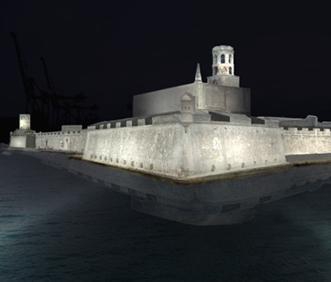 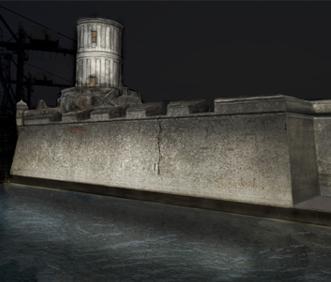 The “Chalchicueyecan” holm was christened San Juan in 1518 after sea captain Juan de Grijalva, commander of the second Spanish expedition. This island, facing a small village (currently the Veracruz port), became a refuge and mooring post for galleons bringing goods and travellers to and from Spain. In 1519 Hernàn Cortez disembarked and in 1535 started the construction of the castle using mainly coral stone, extracted from the seabed and on which the foundations stand, with the aim of protecting both the city of Veracruz and the port from attacks by pirates and buccaneers, through a system of walls that have today been removed. Over the years San Juan de Ulua has been transformed into the most imposing castle on the whole continent and is part of historical events that saw the Spanish bulwark fall firstly into the hands of the French, then to the North Americans (1847), transformed into a prison and in the end, after the Mexican Revolution (1915), into the seat of the federal executive. It is currently its own museum, except for one Bulwark occupied by the Mexican Navy. INAH (Instituto Nacional de Antropologia e Historia) has launched a restoration and recovery plan for the Bicentenary of Independence and the Centenary of the Revolution, in which the Castle will be a "central part of the celebrations". The intervention plan has been divided into two phases and contemplates the creation of a new museum and underwater archaeological interventions for the recovery of vessels and cargo submerged for centuries. The first intervention phase includes the new lighting design of the exterior complex of walls, entrances, bastions, towers and bulwarks to restore the image of the castle to the port and to the city. The choice not to intervene on the building with electrical fixtures and with the utmost respect for the structure and materials, will mean freeing the mass of walls from any trace of installations and remotely positioning sets of projector lamps for the illumination of the architectural complex using light reflected off the water surface. Three positions have been identified in front of the castle for the installation of sets of projector lamps: the two parking areas, for the illumination of the Bulwarks of San Pedro, Santiago and the Guadalupe dock with light reflected off the sea, and the wharf, for the illumination, again via reflection off the water, of the Bulwarks of Soledad, San Crispino, San Vincente Dock and to complete the illumination of the Bulwark of San Pedro. Adjustable projector lamps with 2000W metal-halide bulbs, high colour rendition, very high efficiency and optical spotlights, are small in size, have resilient materials and can be aggregated in light towers. The tower of San Felipe has been illuminated via the adjacent roofing by a small set of projector lamps fitted with LED bulbs. At night the Castle rises from the waters of the gulf with homogeneous and relatively high illumination values (approx. 100 lux), in harmony with the lights of the city, of the seaport and of the seafront opposite, without any visible lighting apparatus.