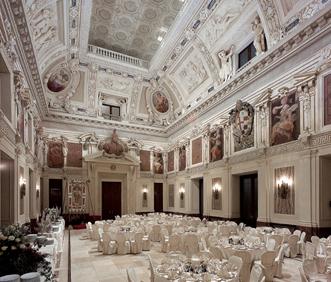 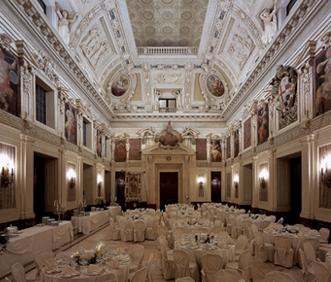 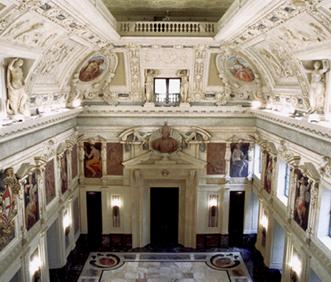 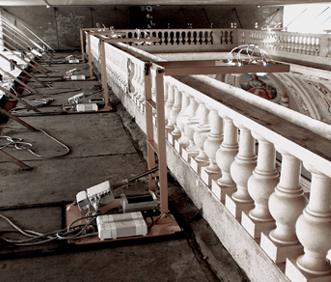 Built according to a design by Alessi between 1558 and 1563 by order of the rich and unscrupulous Tommaso Marino, a collector of salt taxes and banker of Genoese origin, the palace disrupted the fabric of Milan’s urban centre with the demolition of a block situated between it and La Scala, to make room for a square and a new road leading to the area where the Giureconsulti Palace was being erected. The fortune of the Marino family was short-lived, lasting less than thirty years. Following their fall, the palace changed many hands, and then became the seat of the Municipality of Milan from 1861. The Salone d’onore, also known as Sala dell'Alessi after the architect who created it, was characterized by the contribution of Genoese artists Andrea and Ottavio Semino, who frescoed the walls and ceiling with mythological figures, while imposing busts of Mars and Minerva stood guard at the entrances. The new lighting project was prompted by the need to adapt the system to the different ways the hall is used nowadays as a centre of cultural events and official meetings. The basic idea was to preserve the original style of the architecture and recapture the original unitary perception of the space by eliminating the visual disorder arising from the overlapping of extraneous elements. At the same time, the room was equipped with a technologically advanced system for the coordinated and extremely flexible management of the lighting. Five different illumination scenarios were made possible: everyday lighting; lighting for events, meetings, conferences, and special ceremonies; lighting for receptions, parties, and TV filming; lighting for other situations; and emergency lighting.