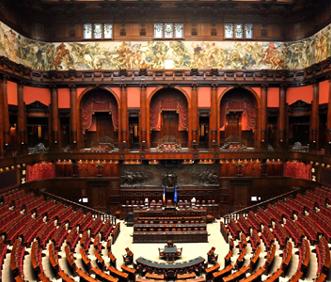 Over the years, the lighting system of the Montecitorio Chamber of Deputies has undergone numerous overlapping integrations aimed at meeting needs that have now been surpassed by technological evolution. The current television shooting methods no longer require the high lighting levels that justified the placement of additional floodlights at both the height of the skylight and stands. The opportunity thus presented itself to restore the architectural dignity to Basile’s work, freeing it from the visual clutter caused by now obsolete interventions. In recent years, awareness has taken hold of how both wellbeing in the work environment and the perception of an architectural space don’t depend solely on quantitative parameters but also on a proper assessment of the aesthetic aspects related to the qualitative nature of the light: the hues and color rendering of the sources, the contrast between diffused and accent lighting, and the alternation of restful and stimulating visual elements to simulate the variability of natural conditions. The project focus was to eliminate the obsolete equipment and the skylight with the repurposing or replacement of the existing historical floodlights. The replacement of the perimeter components of the skylight with suitable etched glass allowed the paintings to be illuminated by placing spotlights above the glass. This location, in addition to preventing the visual presence of the devices and the production of heat in the environment, enables easy access and maintenance. Furthermore, in the Chamber, the presence of several of the most valuable decorative elements, including paintings by Sartorio and the bronze high-relief of Calandra, led to the study and use of luminaires with halogen sources to guarantee the best color rendering. In particular, Calandra’s bronze requires accent lighting without glare, which highlights the perspective depth of the high-relief through a contrast between the figures in the foreground and the background elements. Hence, the use of a luminaire that provided the possibility of independently directing a series of sixteen very low-voltage halogen lamps with controlled optics.