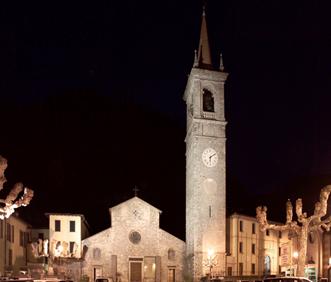 The church of San Giorgio and the bell tower dominate the main square of the historic center of Varenna with its large façade. The plant dates back to the transition period between the Romanesque and the Gothic. The structure of the church has three naves, which can be read in the design of the stone façade, which shows the signs of three phases of construction. At the center of the façade there is a circular splayed oculus of fourteenth-century origins, next to the main entrance a large fresco depicting St. Christopher. The quadrangular masonry bell tower made up of irregular stone and mortar with angles in squared stones; the belfry is surmounted by four piramidal pendentives and a conical brick spire filled with bricks. The lighting project involves a structure with several luminaires placed on a pole in front of the square. The projectors with controlled optics, diffusing glass, emit a "biscuit" light beam for direct illumination and for the composition of beams of the surfaces of the place of worship and the bell tower in the absence of flow dispersion, with slight chiaroscuro. The aggregation of bands allows the illumination to be contained exactly within the perimeter of the building and produces energy savings by avoiding light dispersion and consequently light pollution.