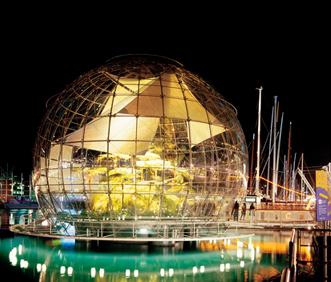 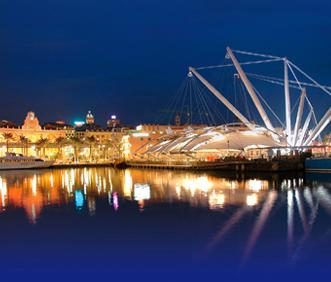 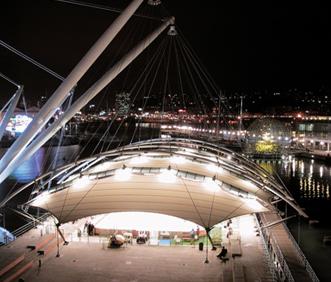 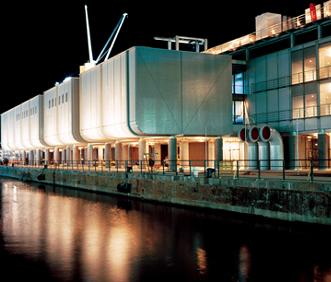 For the fifth centenary celebrations of Christopher Columbus’s endeavor, Genoa’s old port area was redeveloped for urban use, connecting it directly to the historic centre. This freed large areas from the disorderly encumbrance of buildings that had stratified over the last century, at the same time recovering and enhancing existing architectural complexes: the city walls, Porta Siberia, the hub of the 17th century Porto Franco, the cotton warehouses and the old customs office. The Aquarium and the Grande Bigo were built; the latter becoming a landmark for the new area, holding up the tensile roofing structure of the new Piazza delle Feste and containing a panoramic lift. The exhibition space of the ship “Italia” was also fitted out. The area’s lighting was designed with the dual nature of the place in mind; an area restored to the city and directly connected to its historic centre, which however does not betray its origin as a “port factory”. To underline the area’s new functions, white light sources (such as mercury vapor and halogens with dichroic reflectors) were chosen to break with the surrounding port areas, which are characterized by the yellow color of sodium vapor light sources. Moreover, it was decided to utilize as fragmented a lighting installation as possible in order to obtain dedicated lighting solutions for each of the area’s different lighting problems, and fairly small-sized lighting devices were used to highlight the urban appearance of the area (in contrast with the port squares that were generally illuminated using lighting towers).