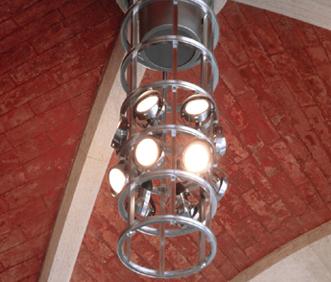 “Palazzo Pubblico”, built in 1300, has undergone continuous work throughout the centuries to restore and strengthen its structure. In 1884 it was practically destroyed and freshly re-build by architect Francesco Azzurri: ten long years of work transformed the Palazzo (“the home of the Government of the Most Serene Republic of San Marino”) into its current form. The intention to design using “the purest local style” is illustrated in the words of Azzurri himself, who declared: ”...the external and internal structure of the Palazzo should express the glorious past of the Republic, its steadiness, its history and its modern organization...” This time the restoration work was limited to structural strengthening; an innovative lighting fixture was designed and built for the new lighting of all public and governmental interiors, drawing inspiration from a “wrought iron cylindrical cage containing a torch”, positioned on the roof of the building. This new device, called “Cestello Cilindrico” and subsequently mass-produced by iGuzzini, houses twelve very low-voltage halogen lamps with controlled light beams that can be tilted both vertically and horizontally thanks to gimbals. Given the great flexibility and possibilities it offers, the “Cestello Cilindrico” was used for the general and accent lighting of all public areas, passageways and decorated walls. It accompanies the visitor from the portico, through the entrance hall and on the enormous staircase, all the way to the rooms housing the “Grand and General Council” and the “Council of 12” in such a way as to mark out, emphasize and unify the official passageway.