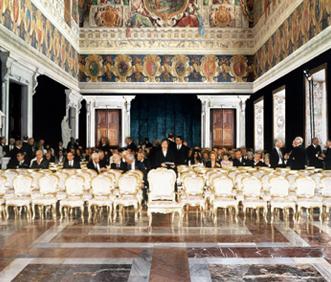 The oldest finds on the Quirinal hill are burial tombs from the 9th century BC; subsequently, in ancient Rome, the hill was walled off, while during the Imperial age the great patrician families of the city built their homes there. In Medieval times, vineyards, gardens and sculptures remained to bear witness to the previous grandeur of Rome, by that time reduced to the size of a large village spread along the unhealthy banks of the Tiber river. The work that led to the current configuration of the Quirinal Palace started in 1574 with the reconstruction of the villa - which at that time belonged to Cardinal Ippolito d’Este - commissioned by Pope Gregory XIII who wanted to build a papal residence on the hill. The work was finally completed during the pontificate of Clement XII (1730-1740). After the Napoleonic Age the building became the residence of the king of Italy in 1879 and then in 1948 the Presidential Palace for the newly born Italian Republic. The Corazzieri Hall, formerly the Consistorial Hall of Pope Paul V, is rectangular and features a rather high ceiling: with a height of 5.5 meters, the room is entirely decorated with frescoes by Annibale Duranti. The centre of the wooden ceiling is embellished with golden decorations on a blue background by Carlo Maderno, and the Royal Coat of Arms was installed there in 1870. The overall restoration of the hall also included the overhaul of the electrical system, which was adapted to meet the latest European Community standards. The lighting system maintained the original position of the fixtures inside the grooves of the outer walls. A special series of "Cestello" fixtures (iGuzzini), with fixed or adjustable optics and with dichroic halogen bulbs (50W-12V) homogeneously illuminate the frescoed wall opposite, the wooden ceiling and the side walls.