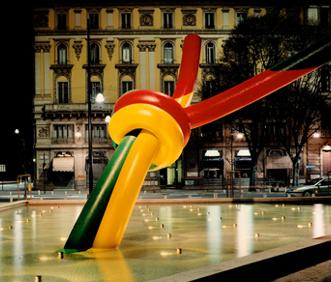 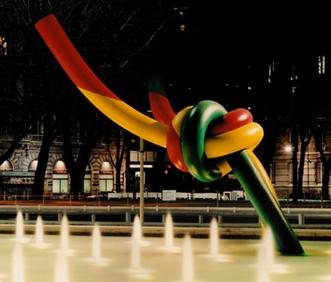 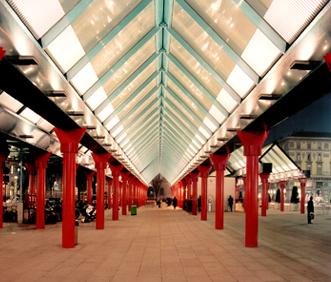 The first stop of the Ferrovie Nord railway line, situated on the northern side of the square, dates back to 1879. In the 1960s the two main underground lines were added and the Malpensa Express railway line, connecting to the international airport, was built in 1999. With the latter development of the terminal came two substantial interventions, activated by Ferrovie Nord and the Municipality of Milan. The refurbishment of the station’s interior, incorporating services for passengers heading to the airport, led to the opening of a new entrance on the north side. The subsequent redevelopment of the entire square, the rebuilding of the façade of the railway building, the roofing over the pedestrian space out the front and the reorganization of the square’s roadways were commissioned to architect Gae Aulenti. The cladding of the façade of the railway building is a sort of second skin that descends into the square to create a set of shelters and transit areas partly covering the square and a small block of retail structures. The sculpture by Oldenburg and Van Bruggen (“Needle, thread and knot”), together with traffic islands fitted with tanks of spurting water, guide and organize the flow of traffic. A set of fixtures that emit fan-shaped beams (“Radius” by iGuzzini), fitted with metal halide lamps and fixed to the metal girders of the shelters, project direct light onto the screen-printed side of the glass roofing and provide adequate luminance values for the walkways and good visibility of the vertical planes.