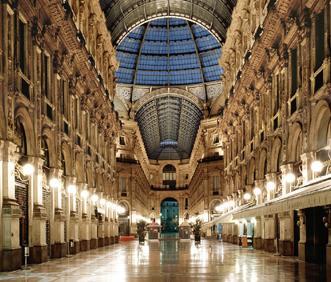 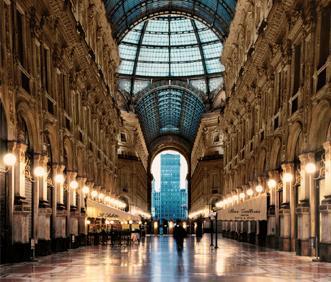 The Galleria Vittorio Emanuele was designed and built by Architect Giuseppe Mengoni (1865-1877) as a covered passageway between Piazza del Duomo and Piazza della Scala. In 1885 the Edison Company started to modernize Milan through the distribution of electricity: the city was lit up by arc lamps, giving Milan’s citizens the proud claim to worldwide primacy in the use of electricity for public lighting. World War II bombing caused widespread destruction, and the Galleria was badly damaged. The post-war reconstruction retained its previous appearance, however the original suspended incandescent lamps that had been destroyed were replaced by a series of projector lamps, concealed in the balcony running along the upper part of the Galleria. The “2000 urban lighting plan” included the re-development and aesthetic and functional upgrading of various areas of the historic city centre to meet regulations. A careful study of the original architectural and lighting projects, together with technological developments introduced over the years, led to the decision to retain the overall design conceived by Mengoni some 150 years ago and carried out using the most advanced technique available at the time: gas! The wall-mounted globes used for the general lighting of the promenade and of the lower part of the Galleria were retained, as well as the existing system for the general lighting of the upper parts of the façades, the central dome and the vaults. New generation 150W metal halide lamps, fitted with ceramic burners, were installed into the 148 new small-sized projectors, featuring asymmetric optics, used to light the upper parts of the façades by aiming the light directly from the balcony towards the façades opposite. This highlighted the structure of the central dome, the decorations of the lunettes and the clock.