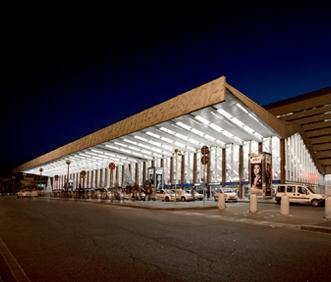 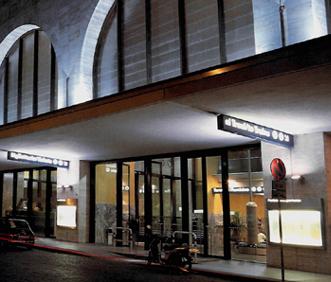 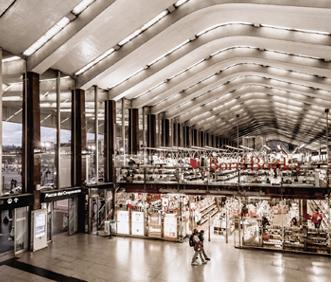 Inaugurated in 1867 by Pope Pius IX, the new railway station of the papal state's capital was built at the gates of the city, close to the Baths of Diocletian, following a design by architect Salvatore Bianchi. Despite subsequent rearrangements, the original building remained more or less unvaried over time until 1938 when the station began to be refurbished following a project by architect Angiolo Mazzoni which, in keeping with the cultural climate of the period, intended to give it a monumental and grandiose appearance. In 1941 however, World War II interrupted the work and it wasn’t until 1947 that a new contest was proclaimed and won with equal merit by two groups (E. Montuori and L. Celini / M. Castellazzi, V. Fadigati, A. Pintonello, A. Vitellozzi), who in collaboration with the General Management of the Railways, finally completed the renovations. The 2000 architectural recovery project aimed to give the interiors - designed in successive phases by architects Mazzoni and Montuori - their dignity back. The new philosophy of intervention re-developed the station both as a place of travel and as a meeting and transit area. Stairways, escalators and moving walkways all made it easier for travelers to move around. The new Forum Termini service centre was set up 4 meters below street level. A large bookshop, built using transparent glass, welcomed travelers in the entrance hall and descended towards the Forum via a spiral staircase. The lighting design followed the more general architectural design, aiming to free voluminous blocks from any added weight and to recreate the type of lighting conceived by architects Mazzoni and Montuori, at different times, using the most up-to-date light sources and fittings.