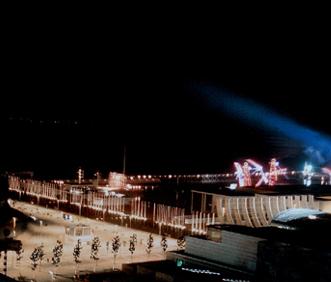 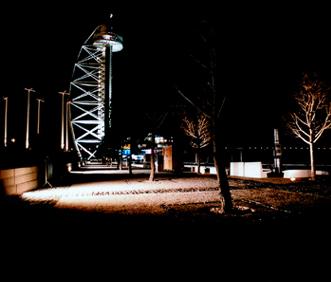 A large disused area of Lisbon was redeveloped for the 1998 World Expo, with the intention of later transforming it and integrating it as a particular area of the city, characterized by large buildings dedicated to fun, entertainment and leisure facilities. This called for functional lighting, serving ordinary urban purposes, and also providing the more "spectacular or playful" lighting needed to create a festive atmosphere, to contribute to defining and enhancing the architectural spaces, to allowing orientation and highlighting the artworks on display. The avenues, bridges and structures built on the water, the landscaping and gardens, the exhibition buildings, the theatre, the refinery tower integrated into the south port, the roads, the service and rest areas, and, last but not least, the River Tagus and its docks were the various themes that inspired the lighting solutions. The project's goal was to create continuity and integration between light and the landscape and between light and visual functions, despite the differences between the types of areas involved. The lighting of the roads was achieved using tall posts to create smooth lighting with limited equipment. The pedestrian walkways were illuminated by oblique lighting with significant luminance levels, without fixtures being present during the day and with sky views free from obstacles at night. Special lighting was designed for the pavilions, bars and restaurants, for the beach umbrellas, fountains, waterways and banners, making the forms and functions of each recognizable at night, even at a distance.