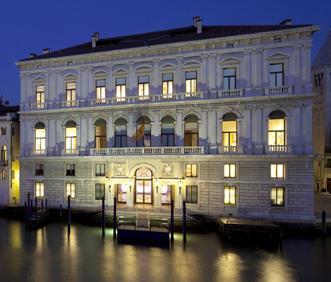 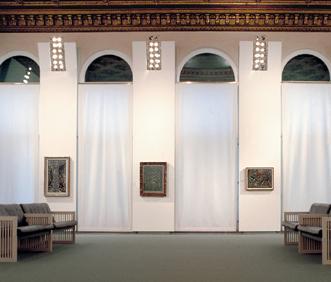 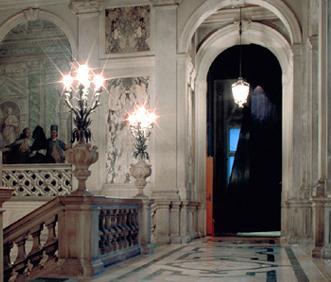 Palazzo Grassi, a 17th Century patrician building facing the Grand Canal, was transformed into a modern and efficient multifunctional cultural centre to host exhibitions, conventions and concerts, equipped with a bar, guest quarters etc. The effort made to achieve a technologically advanced lighting performance, while respecting the standards required for the conservation of works of art, was determinate of its current appearance. Plasterboard panels were used to cover the walls and hide the technical equipment, leaving the original volumes, materials and decorations unaltered. Being unable to mount lighting equipment onto the decorated and valuable ceilings, nor on the walls that were to house the works of art, nor at ground level, as this would impede visitors’ movements, the choice was to insert it into the added plasterboard walls. The "Cestello" fixture was specifically designed, as were all the fixtures used in the building. Equilateral triangular fixtures, fitted with halogen bulbs, were encased into the walls of the connecting stairways to cast indirect light; the entrance hall facing the Grand Canal was indirectly lit via a lighting system of halogen lamps suspended from the lacunar ceiling.