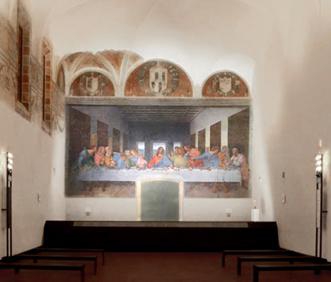 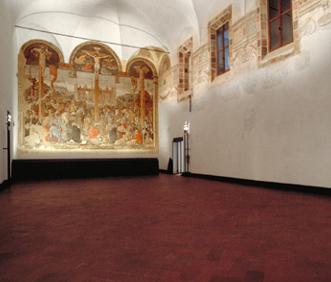 For the past 500 years the Last Supper has been considered an ailing masterpiece, an invaluable treasure to be saved at all costs. Many people tried to undertake the endeavor. In 1566, less than seventy years after its completion, Vasari despaired because all that was left of the extraordinary work of art commissioned by Ludovico il Moro was an “ungainly stain”; so, even back then many attempts at touching up and repainting the work had already begun. The following five centuries were characterized by destruction, pillaging and floods. Finally, bombings by the allies in 1943 destroyed three of the four walls of the church’s refectory, but once again the Last Supper was miraculously spared, leading the entire world to believe that this apparently fragile work of art had tenaciously refused to die. Today, after twenty-one years and over seven thousand days of work, Leonardo da Vinci’s painting has been restored to its former glory with all its colors and intensity. The whole itinerary leading to the refectory was revised and underwent several normative and service adjustments. Thus, to safeguard the microclimate inside the refectory, it was decided that only small groups of visitors would be allowed in at one time. “Cestello” wall and floor fixtures, specially designed and positioned along the longest sides of the hall, contain all the necessary technical devices: halogen lamps with incorporated reflectors to provide the general lighting of the space and frescoes, loudspeakers to provide information, security cameras and heat sensors. Thus, a single element, closely tied to the “monastic” spirit of the hall and causing as little visual impact as possible, provides all the services required by the visitor, in complete accordance with regulations governing the correct preservation of the works on display.