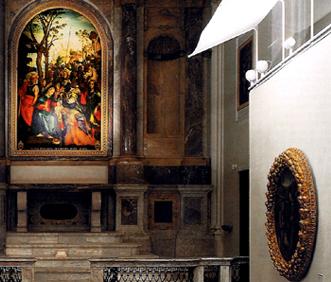 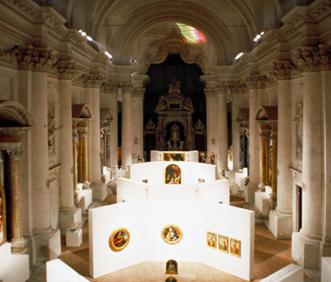 Designed by Vanvitelli, the Saint Augustine Church in Siena features a single, white central nave leading off into side chapels enclosed between columns and pilasters and bordered by a 15-metre high cornice-balcony. This is surmounted by the large windows of the cloister that provide substantial natural lighting and contribute to accentuating the vertical character of the edifice, with strong chiaroscuro effects. As is the case with virtually all historic buildings, a lighting system suitable for an exhibition was almost non-existent. It was thus necessary to provide a completely new and “invisible” electrical system. The organization of the exhibition’s route, given its central position well-away from the walls, did not permit the lighting already designed for the nave and transept to be integrated with the modules supporting the works; an integration that was possible, however, for the parts of the exhibition housed in the sacristy and side chapels. The cornice-balcony was therefore used as a support for a set of lighting fixtures, studied and designed by Piero Castiglioni and produced as a limited series by Targetti. Other fixtures, fitted with corrugated glass and colored gels, were also installed on the same cornice-balcony and projected plays on colors similar to those used by Beccafumi onto the dome above the altar. This created the outline of an undulating banner on the dome’s surface that appeared to flap in the wind.