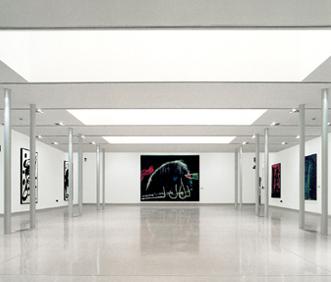 Built at the end of the 19th century, this palace features various shops on the ground floor, topped by six floors of apartments. Over the years the palace has undergone various modifications, in particular some work carried out in the thirties which brought about the Cinema Giardini (best known as a blue movie cinema). Left in a dilapidated state for many years, major restoration work has now transformed the building into a cultural centre with exhibition spaces and offices for the provincial administration of Milan. The lighting supported the more general architectural project. Large windows made it possible to see what was happening inside from the outside and allowed daylight to contribute to lighting the internal spaces, while artificial light illuminated the palace at night. To accentuate this interior/exterior relationship, “Radius” lighting fixtures were placed above the windows on both the first and second floors. Their function was to accentuate the light already emanating from the inside during the night. Given the various activities that take place in the palace, a flexible lighting system was deemed necessary. The lighting equipment had to become part of the architecture. Built-in “Frame” fixtures were used, each fitted with four very low-voltage halogen bulbs, featuring adjustable, varied beams. The regular grid distribution of fixtures and their repetition throughout all areas of the palace (entrance, ticket office, bookshop, computer hall, cinema and exhibition hall) meant that they were assimilated into the architecture, becoming an integral part of it.